With the onset of satellite categories like serums, mists, toners, ampoules and other products that would quickly fill a 10-plus-step routine, you might assume your faithful moisturizer just won’t cut it anymore. But your routine — and your moisturizer — doesn’t need to be costly to be effective. In fact, there are a ton of affordable drugstore moisturizers that work just as well as, if not better than, the expensive stuff.

“When it comes to moisturizers, more expensive doesn’t necessarily mean the product hydrates the skin any better,” says board-certified dermatologist Dr. Joshua Zeichner, the director of cosmetic and clinical research at Mount Sinai Hospital’s Department of Dermatology. And Dr. Michelle Henry of Skin & Aesthetic Surgery of Manhattan agrees: “As technology has gotten better, companies have learned to make effective moisturizers with great ingredients at an inexpensive price.”

But what should you look for in an effective drugstore moisturizer? The answer is three-fold, says NYC-based board-certified dermatologist Dr. Hadley King. “A good moisturizer should contain humectants, emollients and occlusives,” she says. “Humectants, like hyaluronic acid and glycerin, are mostly low-molecular-weight substances that bind water into the stratum corneum, while emollients help in skin barrier function, membrane fluidity and cell signaling.” (That’s just a fancy way of saying the former plumps the skin, while the latter helps improve skin texture and appearance dramatically.)

Lastly, “Occlusives like petrolatum or dimethicone form a protective seal over the skin to prevent loss of hydration,” Zeichner adds.

“This moisturizer hydrates without feeling greasy, so it can be used across all skin types,” says Zeichner. “The formula contains ceramides to help repair a damaged skin barrier. Ceramides are fats naturally found in the outer skin layer, which become depleted in states of dry skin. The moisturizer also has pre- and post-biotics to support growth of good bacteria on the skin.”

Worden loves this one because it’s “packed with ceramides soothing and hydrating ingredients” like niacinamide and glycerin, making it perfect for all skin types.

“This super rich cream rubs in fully without leaving the skin feeling greasy,” says Zeichner. “It’s formulated with a blend of lanolin, sweet almond oil and shea butter to soften the skin and fill in cracks in the outer layer.”

“This daily moisturizer is loaded with hyaluronic acid to plump and re-hydrate the skin, while broad spectrum sun protection blocks UV light which contributes to premature aging,” says Zeichner.

A favorite of Henry’s, this sunscreen has more than 4,000 5-star reviews from buyers, too.

“This ultra-light moisturizer is a great option for all skin types, and is especially useful for people who are oily or acne-prone,” says Zeichner. “The non-comedogenic formula won’t break you out, and it provides broad-spectrum protection from the sun’s UV rays.”

King recommends this one because, “It contains glycerine and hyaluronic acid, which are both humectants, as well as light emollients and occlusives, so the product hydrates, supports the skin barrier and helps to lock in moisture, without feeling heavy.” Celebrity esthetician Taylor Worden agrees, saying, “A super lightweight gel moisturizer gives enough hydration but [is] light enough to not make your skin feel heavy with product.” She likes to put it in the fridge and then apply it for an extra cool feeling.

“This hydrates while reducing shine and keeps oil under control and leaves your skin matte,” says Worden, who also loves it because it’s fragrance-free and affordable.

Another pick from derm-favorite Cetaphil, King says this product is “non-comedogenic and packed with both hydrating humectants and emollients to lock in moisture,” making it a great cream for face and body. “Key ingredients include glycerin, glyceryl stearate, sweet almond oil and vitamin E,” she says. “Glycerin is a humectant and emollient that draws in moisture to hydrate and locks in that moisture. Glyceryl stearate is a conditioning agent that works as an emollient to soften the skin. Sweet almond oil is also an emollient that softens and anecdotal evidence suggests that it may help to rejuvenate damaged skin. And vitamin E is a very effective antioxidant that helps to protect against UV damage.”

Henry says this pick — which also has SPF 30 — is particularly great for oily skin.

“It’s important to incorporate sunscreen and antioxidants,” says King, who recommends Melé’s Dew the Most Sheer Moisturizer SPF 30 because it “contains vitamin E and other moisturizing ingredients, as well as niacinamide, which improves skin tone and texture.”

Worden says this non-greasy pick “literally melts into your skin and feels like velvet.”

This was developed for sensitive and acne-prone skin, Worden says, calling it “perfect to balance and calm your skin” for anyone using harsh acne treatments or products.”

A favorite of Henry’s, this SPF 30 tinted moisturizer also has hundreds of 5-star reviews praising its dewy, natural coverage.

King loves Aveeno’s Positively Radiant CC Cream with Broad Spectrum SPF 30 because of its light texture and anti-inflammatory ingredients like oatmeal — but it’s discontinued. This pick from First Aid Beauty is a touch pricier, but it has a similar ingredient list and a similarly smooth finish.

Henry loves this tinted moisturizer for anyone looking for light, natural coverage.

“It goes on smooth and leaves your skin looking dewy and super-healthy,” says Worden.

Mon Apr 25 , 2022
Products you buy through our links may earn us a commission. By now you probably know ‘reduce, reuse, recycle’ by heart. But here at theSkimm, when it comes to shopping for our beauty cabinets we’re also team ‘find refillable products, cut down on single-use plastics, and source items with compostable packaging.’ (Yeah, we […] 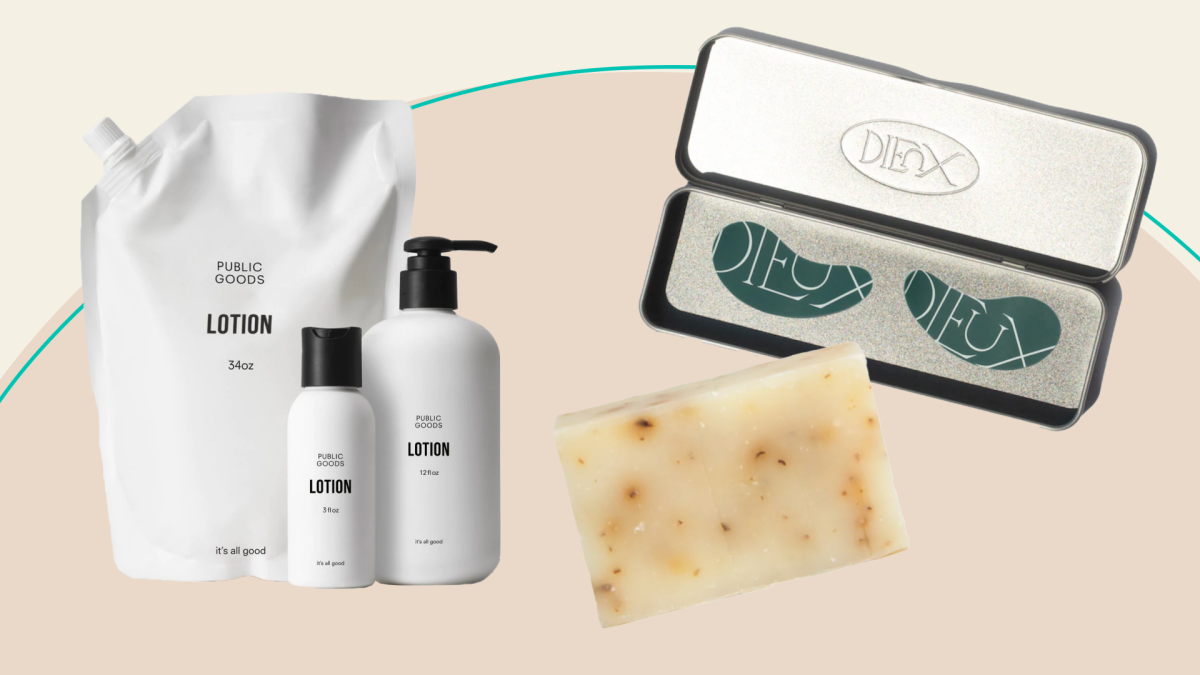